Error you may see is: “TLS session of data connection has not resumed or the session does not match the control connection”

In FTP protocol, data connection does not directly authenticate the client.

The server opens a port and waits for the client to connect to it and upload/download files.

An attacker could figure out the port the server listens to, connect to it before the client, and upload a piece of malware.

The KB4517389 addresses the following issue:

“Addresses an issue in security bulletin CVE-2019-1318 that may cause client or server computers that don’t support Extended Master Secret (EMS) RFC 7627 to have increased connection latency and CPU utilization. This issue occurs while performing full Transport Layer Security (TLS) handshakes from devices that don’t support EMS, especially on servers. EMS support has been available for all the supported versions of Windows since calendar year 2015 and is being incrementally enforced by the installation of the October 8, 2019 and later monthly updates.”

It looks like Schannel stared enforcing EMS. If the server runs a TLS stack which is not compatible with this change, the FTP data connection fails.

Contact the server administrator, explain the situation and and request an upgrade of the FTP server software and of the installed OpenSSL version.

As a temporary workaround, the KB4517389 (or equivalent for non-Windows 10 machines) can be uninstalled.

As a temporary workaround on FileZilla server you can go to “FileZilla Server Interface/Edit/Settings/Ftp over TLS setting” and uncheck “Require TLS resumption on data connection when using FTP over TLS”: 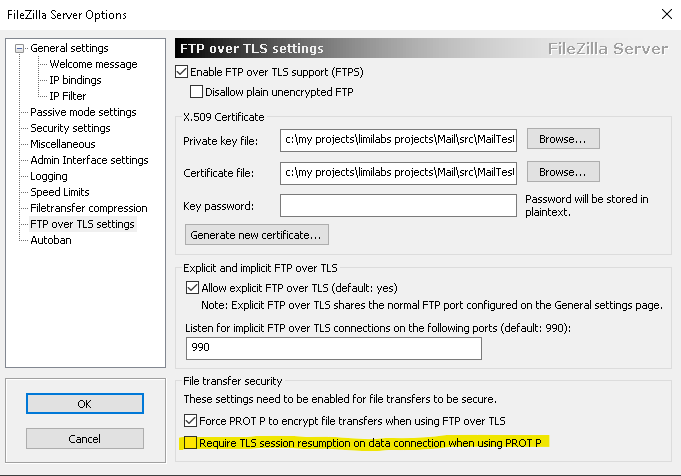 Passive mode is default. You can switch to Active mode using Mode property:

If you need to specify different port just use overloaded version of Connect method:

If you are using SSL:

You can also specify the port range used in Active mode.

You can set the IP address announced to the FTP server in Active mode data transfer.
By default, the value of this property is IPAddress.None which means that the address of the network interface is used instead.

Then upload the file, ask the server for hash of the uploaded file, compute the local hash and compare them:

You can use CRC, MD5 and SHA1 algorithms for hash verification.

The handshake failed due to an unexpected packet format

Most likely your FTP server requires explicit SSL. So first try to connect without SSL:

Now, your connection is secured.

Posted in Ftp.dll | Tags: C#, FTP, FTP component, FTPS, VB.NET | Comments Off on The handshake failed due to an unexpected packet format